The Still Human Still Here campaign is dedicated to highlighting the plight oftens of thousands of refused asylum seekers who are being forced into abjectpoverty in an attempt to drive them out of the country. This is going on righton our doorstep here in Oxford. In 2006, local charity Asylum Welcome worked with 140 destitute refugees. A group of community and student organisations have come together in Oxford to support the campaign, including AmnestyInternational, Asylum Welcome, Refugee Resource, and STAR.

OXFORD SLEEPOUT
A group of students and residents in Oxford are organising a sleep out as partof a National Protest. Please come along and make your voice heard
When: Wednesday 5th of March,
Where: Cornmarket, St Mary Magdalen Churchyard
What: Events will kick of in Cornmarket Street at 5pm with stalls, music,dance, and poetry. There will also be a performance of The Bogus Woman, KayAdshead's award-winning play which tells the true story of a baffled asylum-seeker fleeing a war-scarred continent.
Hot drinks and food will be providedin the church for those sleeping out later in the evening.
Contact: http://mail.lycos.com/Mail-bin/send_mail.form.cgi?TO=oxfordsleepout08@yahoo.com for more information or join the facebookgroup at: http://hs.facebook.com/group.php?gid=10441782989&ref=mf
STILL HUMAN STILL HERE SPEAKER EVENT
STUDENT ACTION FOR REFUGEES is organising a speaker event on the STILL HUMANSTILL HERE CAMPAIGN.
Monday 7th week (25th February) at 8pm - The Bernard Sunley Lecture Theatre,St Catherine's College. All are most welcome.
Speakers: Tim Finch from The Refugee Councilo Lisa Nandy from The Children's Societyo Matt Holman from Asylum Welcomewill discuss the treatment of asylum seekers in the UK system and theimportance of the
The STILL HUMAN STILL HERE CAMPAIGN is dedicated to highlightingthe plight of tens of thousands of refused asylum seekers who are being forcedinto abject poverty in an attempt to drive them out of the country.This will be a great opportunity to find out more about the STILL HUMAN STILLHERE CAMPAIGN and ask questions ready for the National Sleep Out on the 5th ofMarch!
Posted by Site Manager at 16:58 2 comments:

BNP not welcome in Aylesbury 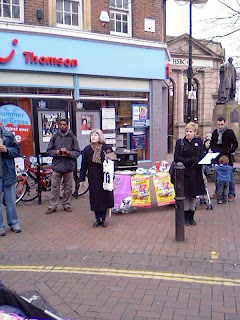 Anti racist campaigners were out in force in Aylesbury last weekend after the BNP's unsuccessful attempted to meet in the town. In the end the neo-Nazis had to meet in small village in the Chilterns.

Unite Against Fascism campaigners got an excellent response and there was widespread disgust that the BNP might seek to spread their brand of race hate in Aylesbury.

Local trade union branches and youth groups are to widely publicise the upcoming Love Music Hate Racism carnival in April and encourage a large turnout from Bucks. For more info on the carnival see: http://www.lmhrcarnival.com/

Sir - The Oxfordshire Climate Alliance - representing the groups listed - wishes to express its great dismay at the county council's decision to limit the choice of technologies for the future of waste treatment in Oxfordshire to incineration.

Contrary to the council's own Carbon Action Plan which promised to "herald the start of serious action to cut carbon", a shortlist of waste treatment companies being considered for a 25-year contract appears to include only proposals for the sort of incinerator that gives off higher climate emissions than a gas-powered station and is almost as poor as a coal-fired station for generating electricity. The council's bias towards incineration is particularly puzzling as there exists a far superior and climate-friendlier technology for dealing with waste. Called Mechanical and Biological Treatment (MBT), it is currently in use in 70 places in Europe - six of these in the UK, with more being installed.

As bad as relying on a carbon dinosaur to treat waste and generate power is locking the county into a 25-year contract. Recently, central government calculated a notional shadow price for carbon to include in financial costings of infrastructure projects. The 2007 price was £25.50 a tonne of carbon, rising to £59.60 a tonne by 2050.

While the council might dismiss such a cost now, both the current Climate Change Bill, which intends 60-80 per cent cuts in greenhouse gases by 2050 and further international climate talks make it increasingly likely that the pricing of carbon emissions will become a reality over the next 25 years.

With these facts in mind, the Oxfordshire Climate Alliance respectfully urges the county council to investigate both the environmental and economic advantages of Mechancial and Biological Treatment over incineration. 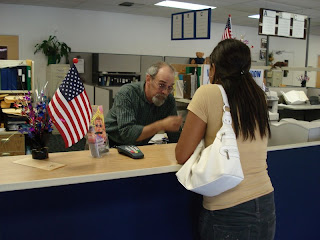 Driving on the Right
I had it all planned out – I picked up the form to apply for a Michigan Drivers’ License last October, and, as soon as I had a social security number (as required by the form), I was going to take the test and get back behind the wheel after a long time as a pedestrian. However, between October and the arrival of my Social Security card in January, fate, John Edwards, and the Republican Party intervened.
Back in October, the contest to choose the Democratic presidential candidate had yet to become a two-horse race. Hillary Clinton seemed the clear front-runner, leaving her opponents in her wake, desperate to land a blow against her in the debates. Then John Edwards landed that blow. He asked Senator Clinton what she thought of the governor of New York’s proposed policy of giving drivers’ licenses to illegal immigrants. Clinton was caught off guard, waffled, and contradicted herself. She was shown to be vulnerable, and from that day on her lead narrowed, then vanished.
John Edwards is now out of the race, but his legacy remains. I and 400,000 other perfectly legal residents of Michigan were left without drivers’ licenses, or the means to get them. In the controversy that followed Clinton’s public embarrassment, the Michigan Republicans jumped on the anti-immigrant band-wagon. Attorney General Mike Cox, and his fellow-Republican, Secretary of State Terry Lynn Land, ruled that licenses were to be denied to anybody who is not a US citizen or permanent resident. What they overlooked is that there are many foreigners (or ‘aliens’ as we are charmingly called in official circles) who are not permanent residents. They include students, business people, refugees, and people like me who are in immigration limbo – here legally, but not yet permanent residents.
Like many controversies over race or immigration, the drivers’ license affair is really a non-issue, inflated by racist or opportunistic politicians. It’s like the British media’s obsession with headscarves and Sharia law – marginal issues that are used to bash Muslims and immigrants. The driver’s license in the USA is widely used as a form of ID, but in law it is merely a permit to drive – nothing more, nothing less. Giving licenses to illegal immigrants does not confer on them voting rights, employment rights, residency rights or anything else. It just makes them safer drivers. But this simple fact has got lost in the stampede of people wanting to put the boot into immigrants again.
This affair tells us a lot about how anti-immigrant campaigns work. Firstly, it shows us not to trust the Democrats. True, the Democratic governor of Michigan stepped in to change the law, so that legal immigrants are now able to drive. But John Edwards’ behaviour is instructive. Of the three main Democratic candidates, he was the most progressive, arguing against the war, and for the reduction of poverty and inequality. Yet given the opportunity, he chose to put scoring points over a political opponent ahead of principle. It also shows how the targeting of ‘illegal’ immigrants quickly turns into an assault on all immigrants.
Reinforcing all the paranoia about immigration is the post-9/11 obsession with security. Having been defeated on the licenses issue, Michigan Republicans are trying to link the new license to the ‘Real ID’ Act, a federal law designed to turn the driver’s license into an identity card by stealth. Both ‘Real ID’ and the Michigan’s driver’s license ban were carried through by invoking the ‘terrorist threat.’ This, of course, is nonsense – the 9/11 hijackers were all in the USA legally, and making it harder to obtain a license is hardly likely to deter a terrorist mastermind. Besides, thanks to neoliberal economics’ devastation of the auto industry, there’s hardly anything in Michigan worth blowing up. Maybe the Republicans fear radical Canadian terrorists crossing the border via the Detroit-Windsor tunnel?
In this climate, it’s not surprising that the Right have tried to make immigration a key issue in the election. The good news is that – at least so far – it hasn’t worked. Tom Tancredo, a Republican politician who ran explicitly on an anti-immigration ticket, failed spectacularly in the primaries. Mike Huckabee tried to use Benazir Bhutto’s assassination to whip up fear against Pakistani immigrants as potential terrorists, but was widely derided for it. Polls show that the voters rank immigration and ‘security’ behind the economy, Iraq, and health care as the main issues. Immigration is there in the background, as a kind of annoying hum, but has yet to move centre-stage. Of course, this may change in the lead-up to general election in November, if John McCain comes under pressure from the Right to prove his conservative credentials. The email whispering campaign against Barack Obama on account of his Muslim background shows how willing conservative Republicans are to play the race card.
Being unable to drive is hardly up there with deportation, working in illegal and unsafe employment, or being shot at by right-wing gun-nuts as the worst thing immigrants have to suffer. But it has given me a personal insight into the pettiness, racism, and witch-hunting mentality of anti-immigrant politics.
PS – It’s off topic, but I loved this anti-smoking ad that’s been on TV here recently. When so many anti-drug / smoking / alcohol campaigns are reactionary and moralistic, it’s a refreshing change to see one done with some humour. http://www.youtube.com/watch?v=o5WpKBKqvKw
Posted by Site Manager at 10:48

Following the County Council announcement that, despite a lack of public support, a city academy is to be established in place of Peers school, the Oxford Anti-Academy Alliance is launching an 'Academy Watch' to monitor the performance of the academy and its impact on schooling in the area.

For this purpose, the Alliance has requested, under the Freedom of Information Act, data from Peers school and the Oxford Community school on a set of indicators relating to attainment levels, social make-up, democratic control and accountability.

It has also itemised a list of promises made by the County Council and the sponsors during the informal consultation, against which the academy's performance will be measured. Details of the performance indicators and the promises made are presented in the Academy Watch Manifesto (to be linked shortly)

"There is no evidence that academies deliver improved education, and the fact that Oxford University doesn't want to have its name linked to an academy says it all"

"Given that this thing has been forced upon us, we need to hold the sponsors to their promises as the children's education cannot be compromised, so it is vital that we monitor the impact on children at the academy as well as on children in neighbouring schools."

11.00:Jerry Cohen on what Happened to the Working Classes
Venue: OKINAGA ROOM

14.00:Paul Jakubovic on the Problem with Dialectics
Venue: OKINAGA ROOM

14.00:Chris Cramer on the Relationship between Conflict and Capitalism
Venue: OKINAGA ROOM

Want to know what’s happening in the NHS?
Did you know VIRGIN are going to run GP surgeries?
Where has all the money has gone?

Keep our NHS Public Campaign...
To inform the public and the media what is happening as a result of the Government's "reform" programme.
To build a broadly based non-party political campaign to prevent further fragmentation and privatisation of the NHS.
To keep our NHS Public. This means funded from taxation, free at the point of use, and provided as a public service by people employed in the NHS and accountable to the public and Parliament.
To call for a public debate about the future of the NHS and to halt the further use of the private sector until such a debate is had.