Message from Oxford Stop the War Coalition
US Special Forces, claiming to be targeting Al Qaida fighers, has
launched an aggressive raid on civilian targets in the Syrian town
of Al Sukkariya, close to the Iraqi border. The attack killed at
least 8 people and wounded 14 others. Two children were amongst the
victims.

This attack follows strikes on Pakistan earlier this months and it
looks as though George Bush is determined to escalate violence in
the Middle East before he steps down from the US Presidency.

The attack also demonstrates why the US is determined to hang on to
Iraq and use it as a strategic launchpad undermining stability in
the region.

The Syrian government has condemned the attack as an act of
terrorist aggression.

In response Oxford Stop the War Coalition is organising an emergency
protest at 6.00pm at Cornmarket (Carfax end) tomorrow evening,
Tuesday 28 October. Please come along and also let other people know
about it.

Caroline, on behalf of Oxford Stop the War Coalition
Posted by Site Manager at 14:51 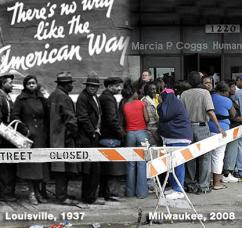 Amid the wreckage of the U.S. economy, John McCain’s election hopes also seem to be collapsing into rubble. It seems hard now to believe that, just over a month ago, McCain was ahead in the polls, boosted by the selection of a dynamic younger running-mate in Sarah Palin (not that it’s hard to be younger or more dynamic than John McCain). Now, it’s true that McCain was barely ahead, and that the ‘Palin bounce’ soon disappeared when people realized she was ultra-conservative and crazy as hell. But what has really done for McCain and the Republicans is the economy’s latest lurch into the abyss. Try as they might to spread the blame (e.g., by accusing the Democrats of making it too easy for poor people and minorities to get mortgages) the Republicans cannot avoid the fact that it was their policies of deregulating the banking system, rewarding Wall Street, and pushing wages down so low that working people had to go into debt to survive, that got us into this mess. What was once a razor’s-edge contest now looks like a potential landslide, with Obama’s poll lead into double digits. Of course, the Republicans will try to steal the election by forcing African Americans off the electoral register, but they will be hard pressed to overturn a deficit of up to 14%. Worse news yet for the Republicans is that Obama leads not only in crucial swing states, but also in states such as Virginia which the Democrats have not won in over 40 years.

In this situation, the McCain camp are desperately trying to distract voters from the economy by resorting to personal smears against Obama, often voiced by Palin, who plays the role of attack-dog while leaving McCain to appear decent and reasonable. So Palin unearthed an old non-story about Obama’s supposed ‘terrorist’ links to an aging 60s radical in Chicago. Bill Ayers, a former member of the ‘Weather Underground’, was involved in bombing the Pentagon in 1972, in protest against the Vietnam War. His two-pound bomb killed nobody, while millions were killed in the war which Ayers opposed. Decades later, having renounced armed actions, he became a well-respected campaigner for school reform, and briefly sat on the same education committee as Obama. Palin defines this as Obama ‘palling around with terrorists.’ But of course, such nuances are not the point – the point is to get the words ‘Obama’ and ‘terrorist’ into the same sentence, preferably including Obama’s middle name Hussein, add the comment that ‘he’s not one of us’, and let the audience take away the message ‘Obama = Muslim = terrorist = Black.’ The real danger of this kind of rhetoric is shown by the kinds of comments shouted by McCain-Palin supporters at rallies when Obama’s name is mentioned: ‘terrorist’, ‘treason’ and even ‘kill him.’ At one of McCain’s cozy ‘town hall meetings’, the Republican candidate was embarrassed when a woman questioner said she didn’t trust Obama because ‘he’s an Arab.’

None of these tactics are working, however, as the economy dominates every political discussion. Ironically, Obama is benefiting from a real sense of class anger that the Democrats have done nothing to encourage. In fact, Obama and the Democratic leadership (along with McCain and the Republican leaders) in Congress supported the highly unpopular ‘bail-out’ plan, which the public rightly viewed as rewarding Wall Street’s irresponsible behaviour by giving the bankers hundreds of billions of dollars of tax-payers’ money. When the initial version of the bail-out was defeated in Congress, the opposition was written off by political pundits as an extremist alliance of right-wing Republicans and left-wing Democrats, bolstered by the ignorant public’s failure to see just what a good thing the bail-out package really was. In fact, both sides of the house were reacting to public pressure, as millions of voters bombarded their congressmen with angry phone calls and emails. There were also small but highly significant demonstrations by unions, in Washington, in New York (where trade unionists marched down Wall Street) and in towns across the country. The victory was temporary, as Congress passed a revamped version of the bill the following week, but it shows what can be achieved. As for Wall Street, it celebrated its salvation by suffering record losses.

There are tough times ahead, as the credit crisis turns into a global crisis of capital. Obama’s support for the bail-out is a warning that the Democrats still broadly accept the priorities of the free market. Actually, it would be more accurate to say that nobody believes the free market works anymore, but neither major party will come out and say it. There is a consensus among the leaders of both parties that the best way to get out of the crisis is to hand over billions to those who got us into it. If Obama wins we should (if I may paraphrase Churchill on a socialist blog!) ‘allow ourselves a brief period of rejoicing’, but then go down to our local union or community organization and knuckle down to the hard work of resisting those who want to make us pay for their crisis.

The next meeting of Oxford Left Alternative will be Tuesday 21st October, 7.30pm in the Town Hall.
Posted by Site Manager at 06:32

Champion of free enterprise in the US and around the world, George Bush said last week that "the market is not functioning properly," arguing for the $700 billion bail-out of the banking system. The controversial deal looks set to go through in the next couple of days, amidst protests among ordinary Americans.

Closer to home, the £40 billion mortgage lending portfolio of Bradford and Bingley has been nationalised, while its other assets are to be sold off to Spanish company Santander. Last week HSBC said it was cutting 1,100 jobs, most of which are in London, because of "market conditions" and a cautious outlook for next year.

Neither the government nor the bankers know what will happen, or what the solution is. The figure of $700 billion was not based on a complex calculation designed to put the markets back on track. A US Treasury spokeswoman said last week that "we just wanted to choose a really large number." The bail-out could be up to a trillion dollars.

As confidence in the market declines and the banks still do not know exactly how much bad debt they hold, and are therefore reluctant to lend to businesses, consumers and each other, the global economy looks set to get worse.

There are, however, a few things we do know. The first is that working people are being asked to pay, through higher taxes, for the mess created by the bankers, who have made many millions in salaries and bonuses. Working people should not pay for this crisis.

The second is that the idea of the free market as the way forward has been thrown into question. It has become clear that unregulated market forces are not able to provide general economic stability and more fundamentally, employment for all and social provision for those who need it. State control in some sectors, like public services such as health, education and transport, is necessary.

With the anxiety over the economy combined with rising costs in food, fuel, gas and electricity, many people are acutely aware that life will become more difficult in the coming months and years. And who knows how long this crisis will last?

But there are things we can do. We can respond to the economic crisis by insisting that energy companies pay a windfall tax; that companies that provide public services be nationalised; and that public sector workers should have pay offers at least at the level of inflation. This is an opportunity to reassess how we want to run our society. Left Alternative says put people before profit, and instead of socialism for the rich, let's have socialist policies for working people.
Posted by Site Manager at 06:31

(The Saturday midway through the UNFCCC Climate Talks (COP 14/MOP 4), in Poznan, Poland)

London Protest 1pm. Coach leaves St Giles (siding between Ashmolean and Quaker Centre) at 9.30am, returns from London at 4pm.

Co-ordinated  demonstrations are planned around the world on Saturday December 6th 2008 to coincide with the United Nations Climate Talks(COP13/MOP3) in Poznan, Poland, December 1st to 12th 2008. - to call on world leaders to take urgent action on climate change. The 'Call to Action' for these demonstrations is as follows :

“We demand that world leaders take the urgent and resolute action that is needed to prevent the catastrophic destabilisation of global climate, so that the entire world can move as rapidly as possible to a stronger emissions reductions treaty which is both equitable and effective in minimising dangerous climate change. We demand that the long-industrialised countries that have emitted most greenhouse gases currently in the atmosphere take responsibility for climate change mitigation by immediately reducing their own emissions as well as investing in a clean energy revolution in the developing world. Developed countries must take their fair share of the responsibility to pay for the adaptive measures that have to be taken, especially by low-emitting countries with limited economic resources. Climate change will hit the poorest first and hardest. All who have the economic means to act, must therefore urgently and decisively do so.

We belive that there is an overwhelming need to create a groundswell of global opinion to push for the urgent and radical action on climate change, without which we risk a global catastrophe of unimaginable proportions. Please join us. For more information visit: www.campaigncc.org