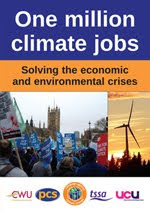 One Million Climate Jobs
Solving the economic and environmental crises
We face an economic crisis and an environmental crisis in Britain and across the world. We need solutions to both beginning now. Climate activists, and several national trade unions, are launching a campaign to make the government create one million green climate jobs. The Campaign Against Climate Change has produced a pamphlet that explains how we can do that and why we must. It will be followed up in early 2011 by a book, presenting the case in greater detail.
To find solutions to the climate crisis and the recession, we need more public spending, the opposite of current government policy. We have people who need jobs and work that needs to be done. A million climate jobs in the UK will not solve all the economy's problems. But it will take a million human beings off the dole and put them to work saving the future.
http://www.climate-change-jobs.org/

One Million Climate Jobs
In 2009, the Campaign against Climate Change Trade Union Group – working with academics, climate activists, the TUC and several UK trade unions including the CWU, PCS, TSSA, UCU and UNITE – decided to fight to make the government create one million green ‘climate’ jobs. We produced a report ‘One Million Climate Jobs NOW!’

Thousands of copies of this report have been sold around the world. There are now over two and a half million unemployed people in Britain. We have people who need jobs, and work that must be done.

This latest report sets out how, and why, the government must create one million climate jobs – in renewable energy, refitting buildings, public transport, industry and education – if we are to solve the economic crisis and avoid environmental catastrophe.

The report details a scientifically sound, do-able and inspiring alternative to the present government’s vicious and unwarranted programme of public service cuts.

In Oxford, contact Nancy Lindisfarne 07981607107
Nanstarr44@hotmail.com
Carbon cuts not job cuts
Green jobs- Where the main political parties stand
Labour Party
"Labour’s policy anticipated that an additional 400,000 jobs in the low carbon sector would be created by 2015, taking the total figure to well over 1.2 million" (Ed Milliband July 2010)
Liberal Democrat Party
The Liberal Democrat manifesto pledge is to create 57,000 jobs by investing £400 million upgrading disused shipyards to enable the production of off-shore wind turbines.
Conservative Party
"The Government believes that climate change is one of the gravest threats we face, and that urgent action at home and abroad is required. We need to use a wide range of levers to cut carbon emissions, decarbonise the economy and support the creation of new green jobs and technologies" (No target given)
Green Party Policy
"Our major and immediate priority is the creation of an extra million jobs and training places. An immediate £44bn package of measures would include workforce training, investment in renewables, public transport, insulation, social housing and waste management "
Posted by Site Manager at 01:15 No comments:

Police intimidate 12 year old for involvement with a protest against Youth Club closures planned by the Tory led County Council.
The story has been reported by the Guardian
For details of the protest see Oxford Right to Work Facebook Group
Posted by Site Manager at 11:54 1 comment:

This coming week will be a week of protests against government cuts. Both locally and nationally, people are taking to the streets to oppose tuition fee increases, abolition of the Education Maintenance Allowance, cuts to higher and further education and the closure of 20 local youth centres.
These are key campaigns which, if they are successful, will lead the way to further victories in the fight to defend public services.
On Wednesday, UCU and NUS have called a day of local action against education cuts and tuition fee increases. There will be a lunchtime protest at Oxford and Cherwell Valley College, Oxpens Road (12.45pm-1.15pm) called by OCVC UCU and an evening rally in Bonn Square (5pm) called by Ruskin UCU and supported by Oxfordshire Anti-Cuts Alliance.
On Thursday, there will be a national demonstration called by London Region UCU and University of London Students Union. Oxfordshire Unison Health, Oxford UCU and Right to Work have booked coaches leaving 9.30am from outlide the Taylorian Institute, St Giles. To book places, call 07890081211.
On Friday, Save Our Youth Services have called a demonstration at 5pm outside David Cameron's Office, High Street Witney, against the closure of 20 local youth centres.
Next Monday, there will be lunchtime protests against cutting Education Maintenance Allowance, which supports 16-19 year olds to continue in education. Further details will be sent later in the week.
Further ahead, we are calling a lobby outside the County Council Cabinet meeting 2pm on 21stDecember. This will be an opportunity to draw together all our concerns about local and national cuts and demand that our local political representatives act on them.
This coming week will be crucial in terms of showing the strength of feeling against government cuts and also people's willingness to fight them. Please make every effort to get involved in as many events as you can.
Oxfordshire Anti-Cuts Alliance
Posted by Site Manager at 01:49 No comments: 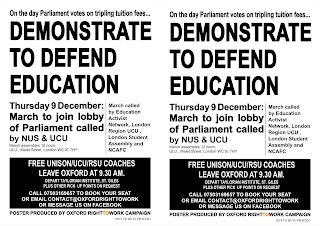 Posted by Site Manager at 10:37 No comments: 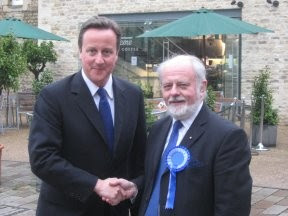 The Tory County Council leader Keith Mitchell, responsible for pushing through perhaps 1,000 job losses in Oxfordshire, has posted the following rant on his blog:

"Student rabble invade County Hall Reflecting on the acts of trespass and vandalism when a scruffy rabble invaded County Hall, it seems that a good number of these oiks were school children rather than college or university students. This raises two questions in my mind:

First, locally, in Oxfordshire, how did all these teenagers bunk off their studies? What are the truancy records for Oxford schools on the afternoon of 30 November? I hope school teachers were not complicit in encouraging these children to bunk off school?

Secondly, given that there were similar example of lawlessness across the country, what is driving this national outbreak of unlawful behaviour? I suspect the hard left are working up a campaign to make such lawlessness appear to be the norm and therefore to become acceptable."

Posted by Site Manager at 14:19 No comments: